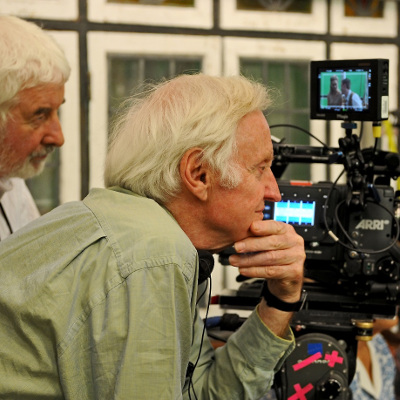 Step into the film and TV industry by learning how to direct a film, with instruction and guidance from award winning film director and lead tutor John Boorman, supported by his team of professional film crew.

This is your chance to work with experienced heads of department to kickstart your career in filmmaking and make valuable contacts in the film industry.

During the course you will have opportunities to network in an informal setting with fellow attendees, tutors and representatives from the film and TV industry.

Who Will Benefit From This Filmmaking Course?

This course is aimed at people who want to “step into” the film and TV industry. Participants may be enthusiastic hobbyists, or they may wish to use filmmaking as an additional skill within their employment, or may see this as a stepping stone or a foundation course to take the next step into the world of professional filmmaking.

This is a bespoke service catering for all skill levels, where participants will have the opportunity to engage with the highly experienced course instructor John Boorman, an award-winning film director with over 40 years' experience at the highest level, and his team of professional film crew.

On the successful completion of your course, you will be awarded a personalised Irish Film School Certificate of Completion in Filmmaking, signed by John Boorman, in recognition of your educational achievement.

You will also be invited to join the IFS Alumni Association where you can continue to exchange information, share tips and receive exclusive offers and invitations to events.

Day 4: Your Light and The Shoot

Day 4: Your Light and The Shoot

Students will have the opportunity to try different filmmaking techniques with John Boorman and Oscar-winning Philippe Rousselot, whose work includes Fantastic Beasts, Hope and Glory, Interview With The Vampire and A River Runs Through It, including:

The Shoot will commence in the morning when actors will be brought into the studio and will be directed in the test scene by John Boorman. Students will get an opportunity to view John at work and there will be Q&A with him at the end of the demonstration.

An outstanding stage and screen actress, Lia Williams will give an overview of the working relationship between the Actor and the Director on a film. Lia has been nominated for a Tony Award on Broadway, and 3 Olivier Awards in the West End.

On the final day students will get the opportunity to step into the film industry and direct the actors in the test scene. Students will also work with John Boorman and an experienced editor on various elements of post- production with an intensive study in:

These practical exercises will be followed by:

This one-week Filmmaking course is designed to give you a hands-on, intensive and immersive introduction into filmmaking and directing. The IFS social programme will allow you to network with like-minded individuals and build valuable relationships and contacts with your fellow students and with professionals from within the film industry.

At the end of the course you will have acquired the necessary skills to direct a feature film.

Upon successful completion of the course you will be presented with a personalised Irish Film School Certificate of Completion in Filmmaking, signed by John Boorman, in recognition of your learning and achievement.

Our Alumni Association will allow you to stay in touch long after your course has finished and will give you a forum where you can exchange information, share tips and receive exclusive offers and invitations to events.

This course will give you the confidence to go on to further study, to begin working in the film industry or to change careers. Many of those in employment will add value to their CVs with a new skill in digital filmmaking and could receive a promotion or an increase in salary as a result of completing this course.

Places are strictly limited to a maximum of 30 students per cohort. So, take your first step into the business and contact us today!

"I would urge anyone who has a desire to begin a career in the film industry, to attend this course. The contents of the course, are so comprehensive."

"I certainly would recommend the course to others. It is a wonderful opportunity to learn from and discuss ideas with an industry living legend and emerging filmmakers in a relaxed and intimate setting. Nicely paced, the 5-day course was a pleasure to be a part of from start to finish. There were many standout moments, particularly hearing Mr Boorman's first hand anecdotes about film industry greats such as Stanley Kubrick, Lee Marvin, Jack Nicholson, Sophia Coppola to name but a few."

"The course gave me the language and confidence I need to go and make my films a reality."

"I chose to study with the Irish Film School because it offered training that seemed tailored to my particular requirements. The course outline was very impressive and the credentials of those delivering the course were unsurpassed. I would definitely recommend the course to others. It is crammed with practical advice and offered in a very supportive atmosphere. Working with John Boorman was a privilege that I will never forget."

"The course gives a great insight into the key areas of filmmaking that would be useful for people at various stages of their filmmaking career."

"The filmmaking course will help me as it has taught me how to go about writing an unturndownable script. I found the casting and shooting process brilliant and interesting. It taught me how the entire process works which makes me believe that I now have the skills and knowledge to work my way into the industry"

"I would like to say thanks to John Boorman, Kieran Corrigan, and the whole crew...It was a very good experience and John Boorman is a wonderful teacher."

"I believe there are very few courses available where live industry people lecture and share in some cases confidential information; this was particularly valuable. I think the course represented great value for film making enthusiasts."

"I thoroughly enjoyed John's course and definitely learned a lot from it. A great wealth of information was successfully squeezed into the five days."

"John Boorman’s insights into the art of filmmaking were both informative and inspiring, giving me the confidence and knowledge to begin a career in film."

"I thoroughly enjoyed the experience of learning from and being in the presence of a man whose technical knowledge and creative output is amongst the finest in the history of cinema. To say I highly recommend this course would be an understatement, it should be considered mandatory for all serious filmmakers."

"The course gave me exactly what I was hoping for, an excellent introduction to the key elements of filmmaking, with discussions on how to approach, think about, plan and develop a film as well as hands-on sessions in developing a script and shooting a scene. John Boorman is an excellent teacher, drawing on his wealth of experience and discussing many practical examples and sharing insights and wisdom on filmmaking that were priceless. Ronan O’Leary also was a vital presence, expanding on points throughout the course and guiding us through our scene shoots. I thoroughly enjoyed the course and would certainly recommend it to others."